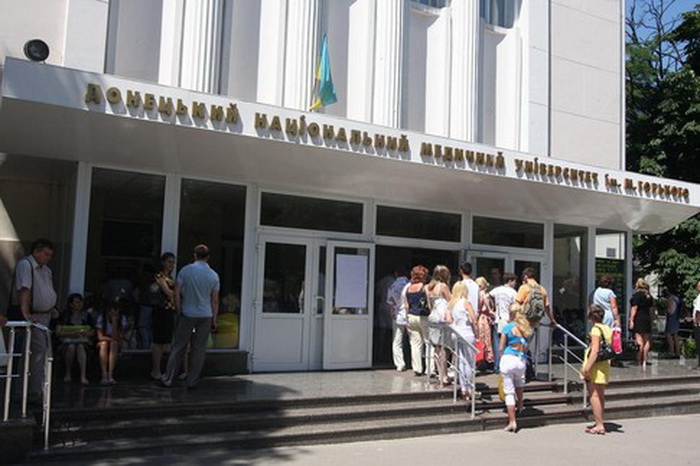 The University is known as DNMU and it’s the abbreviated name of Donetsk National Medical University.

Donetsk National Medical University “DNMU” was the first medical university in kUkraine and in eastern Europe who started the faculties of Medicine and Dentistry in English language for foreign students in 1991 after independence of Ukraine.

Donetsk National Medical University “DNMU” is the most attractive to foreign students among other Ukrainian medical universities due to it’s highest ranking, high level of specialist training, high tech laboratories, good knowledge of English language of the staff, campus system of the DNMU.

Today more than 15000 students are studying at eight faculties of Donetsk National Medical University“DNMU”. Among them there are about 4200 foreign students from Russia, Georgia, Armenia, Azerbaijan, Turkmenistan, USA, UK, Germany, Poland, Greece, Israel, Turkey, India, Nepal, Srilanka, China, Malaysia, Mauritius, Pakistan, Ghana, Nigeria, Cameroon, Peru, Palestine, Iran, Iraq, Kuwait, Jordan, Syria, Tunisia, Kenya, Namibia, Zambia, Lebanon and from other countries studying at the DNMU at the moment. Due to the high level of specialists training and considerably low tuition fees, DNMU is one of the most attractive Ukrainian Medical Universities for the foreigners.

In total more than 52,000 highly qualified doctors, well-known scientists, researchers, health service organizers from Ukraine, Russia, other CIS countries and as well as from 96 countries of the world from Africa, Asia, Europe and Americas have graduated from the Donetsk National Medical University (Mariupol Campus). Among them were more than 8000 foreign students from all over the world including 3 Doctors and 70 Candidates of Medical Science, about 200 clinical post-graduates (residents).

At present the total teaching staff at Donetsk National Medical University “DNMU” is 1147. Among them are 150 professors and 243 Associate Professors, academic title of doctors and candidate of medical sciences are respectively 117 and 449 people. In the Donetsk National Medical University (DNMU) is a member of National Academy of Sciences of Ukraine and two corresponding members of AMS of Ukraine,4 laureates of State Prize of Ukraine,18 distinguished scientists and engineers,8 distinguished doctors,2 Honoured worker of Education of Ukraine,37 full members of international and departmental academies science, 1 Hero of Ukraine.

According to the Ukrainian Health Ministry Order N°148 of March 22, 2004 DNMU has been appointed as Regional Centre of Bologna Process managing in Ukraine. In 2005/06 academic year, DNMU has started teaching its students in accordance with the Bologna Agreement on specialists training using the credit-modular system, and upon completion of their education the students will obtain the Specialist Degree of European standard.  DNMU students will be able to study various academic modules at practically any European medical University and after getting the Specialist Degree they will have very attractive employment prospective

The DNMU also got an array of libraries that not only provides books for the courses, but also for the general knowledge as the student’s desires. Most of them works till late night, that the student can work flexibly not looking at the time.

The students of DNMU get their professional training at 26 specialized bases (including Donetsk multifield medical and preventive organizations and research institutes) and 28 highly equipped clinical bases (including main hospitals of Donetsk) underf the supervision of highly qualified specialists.

Our University has everything required for study to become highly qualified physicians and pharmacists.

The Degree of the  Donetsk National Medical University (Mariupol Campus) is prestigious and recognized in many countries of the world. Among former graduates of the University there are ministers and members of parliaments in various countries, outstanding scientists and famous specialists who founded their own clinics abroad.

The  Donetsk National Medical University’s (Mariupol Campus) long experience in training of foreign specialists, highly qualified teaching staff and modern facilities – all guarantee high level of theoretical and practical training to the students of the University.